Capital city of the “MoselWeinbergPfirsich”

Cochem is considered capital of the “MoselWeinbergPfirsich” (Moselle vineyard peach). And now, you might wonder: Peaches grown on the Moselle river? Isn’t that fruit much more suitable to be cultivated in Southern European regions? And what does a peach have to do with vineyards?

A piece of cultural history

The ancient Romans brought the so-called Persian apple with them when they settled on the Moselle river. Since then, it has become wine grape’s close friend. It enriches the winemaker’s cuisine, and the dainty tree doesn’t require much of the vineyard’s space. There, in April, the peach shows his talents as an ambassador of spring, when pink petals adorn its branches, long before the grapevine’s first green leaves are sprouting. In autumn on the other hand, its dark red leaves a fiery note to the yellow Riesling landscape. There is no place where you can experience these fireworks of colour as intensively as in the region around Cochem. Four fifth of all the Moselle’s vineyard peach trees can be found in our rural district’s vineyards – thus the designation ”Cochem – capital of the “MoselWeinbergPfirsisch””! The vineyard peach is experiencing a renaissance, as there is a growing interest regarding pristine, healthy products and a general going back to traditional kitchen secrets. But that is not all:

A MoselWeinbergPfirsisch can be compared to Aladdin’s magic lamp: inconspicuous at first sight, almost worthless. But as soon as Aladdin found out about the lamp’s good ghost, he never wanted to be without it ever again. Whoever holds our peach for the first time might experience the same: small and rigid its appearance, dressed in a furry skin of mousy grey. But what a ghost, that is hidden inside. Its ruby red flesh is a true delicacy as a marmalade, a trendy Mosel-Kir, or as a side dish to our regional delicacy “Debbekooche”. Even when it comes to exotic dishes, our peach serves as an excellent addition, in spicy chutneys or caramelized on Panna Cotta – just to name a few examples. But it is not only in the taste of our tangy-sweet peach that it possesses magic powers! It promotes general well-being, as it provides you with the double amount of anti-oxidants compared to an apple. Therefore it protects you from cancer and arterial sclerosis. 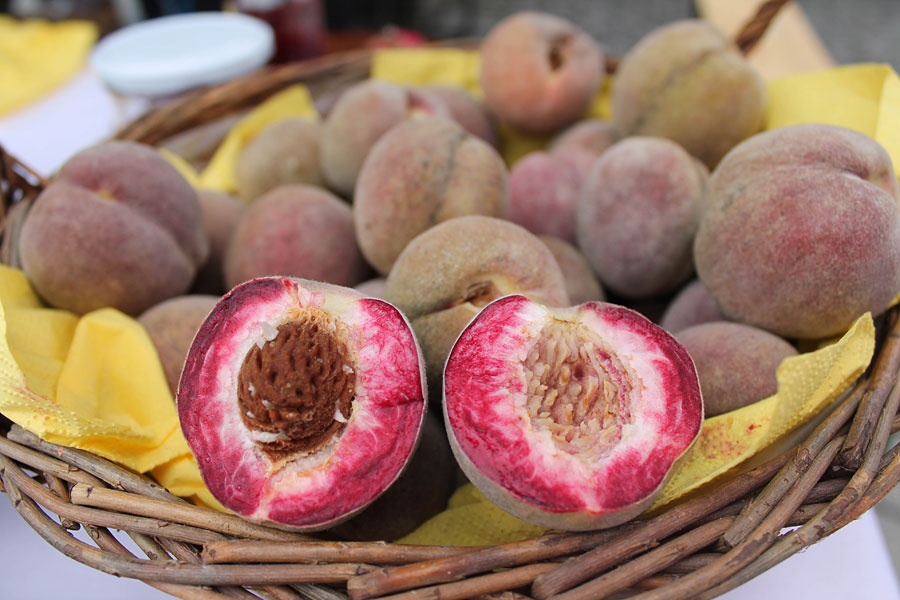