The imposing baroque style building situated at our market place’s northern side was commissioned by the archbishop of Trier in 1739 as his “kurfürstliches Amtshaus” (Electoral council’s office) following architectural plans of Ravensteyn. Under the reign of the electorate of Trier, the town was the centre of the department of Cochem.
Even older preceding buildings to the old town hall have been documented since 1388. The youngest one however was destroyed by French troops in the course of the Reunion wars in 1689.
The old town hall with its rectangular base of 17,5 metres by 12,4 metres has front walls 1,3 metres in thickness. Its reddish plastering forms an attractive contrast to its door and window frames made from the Mayen region’s basalt lava stone. The town hall has a beautiful mansard roof that is hipped to both sides. Particularly striking are the carefully restored balcony door, the stone balcony itself with its robust brackets and its original pilaster portal from 1739.
The town hall’s ground floor served as trade hall and houses the separated council hall. The mayor’s office is situated on the top floor. Under the former reign of the archbishops of Trier, it used to be the electoral council’s chamber. During the Prussian period, it was used as an office by the head of the district authority. Until 2009, the old town hall was the city administration’s main seat with its 30 functionaries and employees. The city of Cochem is administered by the municipality of Cochem along with 22 surrounding cities and villages ever since. 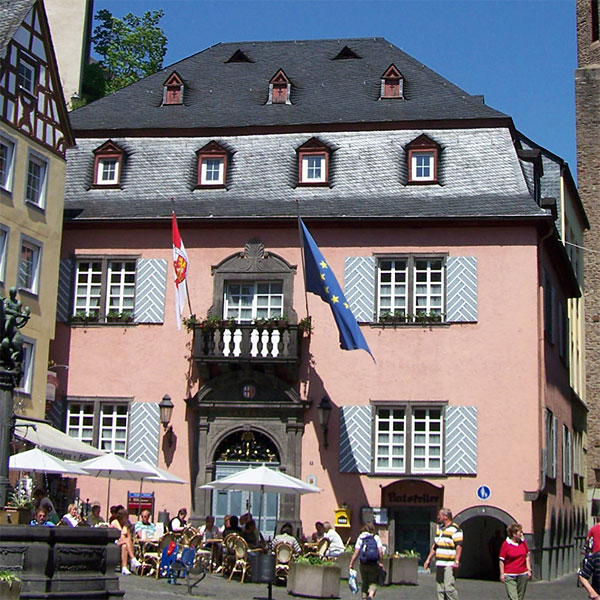