The history of Cochem in Celtic, Roman and early Middle Ages is unknown. It is first mentioned in a document of the Abbey of Prüm dated 20. XII 866. The noble matron Hieldilda donated a number of properties to the monastery, including a manor house “in villa cuchema”.

There, in the fortified castle the Rhenish counts palatine, the Ezzonen, held court until 1151. It was probably built by one of them, Ehrenfried, the brother-in-law of Emperor Otto. Richeza, his daughter, married Miseco, King of Poland, but after his death was driven out of Poland and returned to the Moselle.

A less glorious role was played by Count palatine Hermann of Salm and Luxemburg, who was put forward as an alternative monarch to Emperor Henry IV in the investiture conflict. In 1085 he was defeated by the Emperor, after which he engaged in various adventures along the Moselle Valley before being killed in front of his own Cochem Castle in 1088. He does not seem to have earned much respect, his nickname being the “Garlic King”.

The disputes between the Reineckers and the Stahleckers of the Rhine over the title of count palatine was finally settled in 1151 when Konrad III, coming from Boppard, overran the castle and occupied it as an imperial fief.

Cochem remained imperial property and a royal customs station until 1294. The castle was inhabited and administered by royal burggraves, who occasionally became so called robber barons. Indeed in 1282 Rudolf of Habsburg was obliged to lay siege to the castle and call Count Cuno, lord of the castle, to account for his activities of this type.

The “Burgfrieden” below the castle and also the “Herrenstraße” were occupied by nobles who had sworn allegiance to the lord of the castle and enjoyed freedom from the burdens and duties imposed on the other inhabitants. The “Empire of Cochem”, an extensive area covering the future magistratures of Cochem, Kaisersesch and Mayen as well as the “Cröver Empire”, Springiersbach and the Kondelwald, effectively formed a barrier between the two parts of the Archbishopric of Trier, the Upper and Lower Dioceses. In 1294 the impoverished King Adolf of Nassau fulfilled the wish of the Trier archbishops by mortgaging Cochem to Archbishop Boemund I. The mortgage was never repaid and Cochem continued to belong to the territory of the Electorate of Trier until 1794. Thus, began a happy and prosperous time for the castle, town and newly formed magistrature of Cochem. The motto of the day, “Life under the crosier can be quite pleasant” was not without foundation.

Archbishop Balduin (1307 – 1354), brother of Emperor Henry VII of Luxemburg, further extended the castle. The Moselle Way was also extended and Kemplon fortress built. Cochem received its town charter in 1332 and was fortified. Distinguished families such as von Dietz an der Lahn, von Ulmen, Bürresheim, Arras and Monreal were proud to be associated with the castle. The Winnenburgs, whose fortress in the Endert valley probably dates from 1200, and later the Metternichs held court in the Markt and dominated life in the town. The leading figures from the Electorate liked to visit Cochem often, and in 1512 Archbishop Richard of Greiffenklau and his guest Emperor Maximilian I led a procession to the town and St. Martin’s Church.

Cochem however was not spared less fortunate times. St. Peter’s Chapel, below the castle, recalls the years of the plague (1423 – 1425). During the 30 Years’ War bands of robbers such as the Moselle band mentioned in the journal “Simplizissimus” left their mark.

But the worst came in 1688 and 1689. In 1687, Louis XIV’s master builder of military buildings Vauban had built Montroyal fortress near Traben-Trabach. From here the French filled the Moselle Valley with violence and terror. Again and again magistrates and town clerks travelled to Montroyal to try to obtain relief.

In 1689 Winneburg Castle was attacked and burned, and two days later the same lieutenant du Saxis turned Cochem Castle “sacrificed to the volcano in broad daylight”. When imperial and Electorate forces reoccupied the town, the French decided to counter-attack. On 25 August they stormed the town, slaughtered the weak garrison and a large part of the population, and set fire to the town and the Capuchin monastery, the defenders’ last refuge. This left the town impoverished and deserted. Reconstruction was slow, in part using materials from Montroyal fortress, which in turn had itself been razed to the ground. The parish church tower was not completed until 1733.

During the course of the 18th century, Cochem became more and more a centre of commerce. Every week the market ship full of goods and merchenats sailed to Koblenz. For the Frankfurt Fair Cochem rigged out a ship and sold spices, ironmongery, corn, wood, leather, and the finest Cochem cloth. A large number of inns sprang up, their signs forming a chain from gable to gable, with the Bear greeting the Ox, the Swan the Lion, the Holy Spirit the Sun, and so on. The
Double Eagle, the German Emperor, the Roman King and the Court of Cologne were well-to-do inns, situated mostly on the banks of the Moselle, and catering to the upper classes. In the early 19th century a travel writer marvelled at the fact that Cochem “had as many wine and beer taverns as Breslau, the second largest city in Prussia with more than 90.000 inhabitants”. In 1796 Cochem was occupied by French Revolutionary troops and subsequently, together with the entire Rhineland, came under the wing of France. Troup movements, taxes and billeting brought about increased prices and poverty, which in turn led to the formation of bands of robbers roaming the Moselle Valley, the Eifel and above all the Hunsrück.

At the Congress of Vienna in 1815 Cochem was given once and for all to the Kingdom of Prussia and in 1816 became the administrative centre of the newly created district authority. The crazy days of 1848/49 led to the formation of the “merry democracy of Cochem”. Grandiose speeches were made in the Sun and the Customs House (nowadays the Union Hotel). Even today at Carnival time a song can be heard in Cochem telling about the “year when it was Carnival all year round”.

Between 1869 and 1877 the Berlin steel merchant Ravené had the ruined castle rebuilt according to old plans from 1576. In 1942 the castle became the property of the state. The rebuilding coincided with the opening of the Kaiser Wilhelm Tunnel, which reduced the “Cochem Hairpin” from 21 to 4.2 km and was the longest tunnel in the Federal Republic of Germany until 1987. 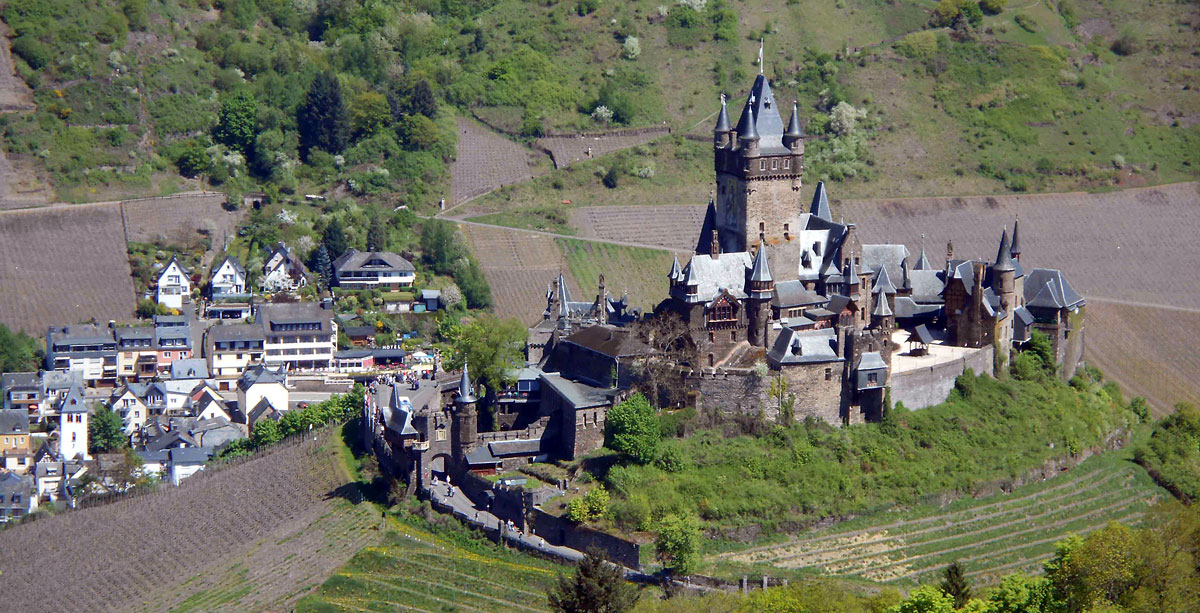 Since the 1st of April 1978 the castle has belonged to the city of Cochem. The two fishing villages of Cond and Sehl developed independently of Cochem, and for many years Cond belonged to the territory of Stablo-Malmedy imperial abbey. The Moselle bridge was completed in 1927 and in 1932 Cochem and Cond were combined into one town.

The stationing of an air force squadron near Cochem in 1956 led to the development of the Brauheck district of Cochem.

In the early 19th century, the first real tourists came to Cochem, filled with romantic enthusiasm. Foremost among them were English artists who recorded the beauties of the Moselle Valley in their drawings and paintings. The development of Cochem into the first and most important tourist centre on the Moselle river manifested itself in the 1930s.