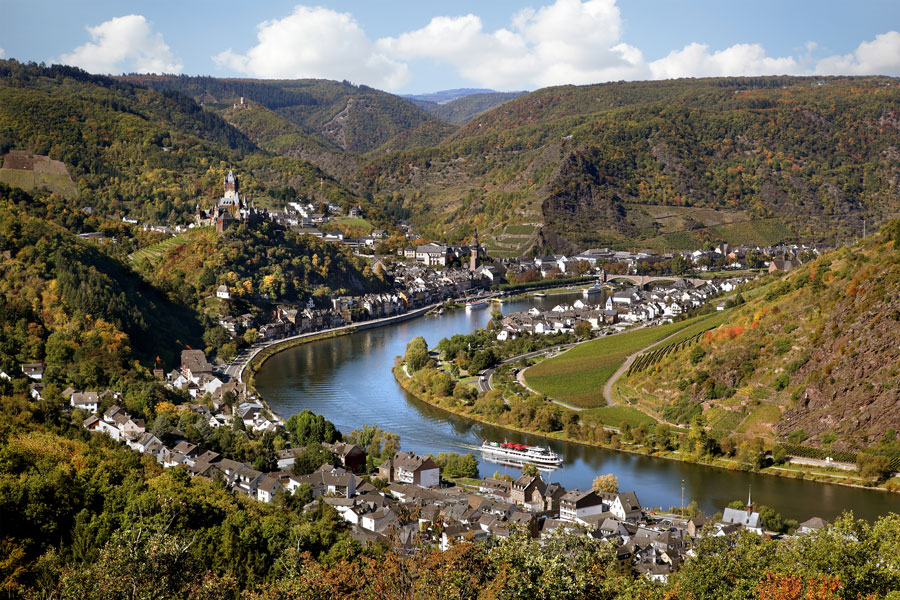 …is the district to the Moselle river’s right side.

Cond was first mentioned in a document in 857 as “villa Condendunum”. Next to the old village centre, Obercond is an important part of the municipality. Here you can find a vast residential area and the Moselstadion (the local stadium) as well as a leisure centre, a hospital, a shopping centre and the new Moselle bridge. The settlements core is the so called “Siedlung” surrounding Kapellenstraße which dates back to 1926. In that same year, the “Gemeinnütziger Bauverein” was founded in accordance with the “Reichsheimstättengesetz” in order to enable its members to build their own residences. The building of the first bridge crossing the Moselle was just as important for the district’s development. It was inaugurated on the 23rd of January 1927 after two years of construction. With its improved accessibility, the erstwhile viniculture school (established in 1928) as well as the erstwhile tax office (inaugurated in 1929) were built. In 1932, Cochem incorporated the district of Cond.

…is situated above the city centre on the Moselle’s left bank.

In the district of Sehl, one of the region’s oldest timber houses can be found. Dendrochronological examinations have shown that the house dates back to the years 1374/75. In 1493, the archbishop Johann von Baden granted a permission to build a daughter church to Cochem’s parish church Saint Martin in Sehl. The house of God is consecrated in the name of Saint Anton. Its west portal was added 1915. The church adds to the atmosphere of nowadays Sehl and is fondly called “Sehler Dom” (Sehl cathedral) by the citizens. Ebernach Monastery in Sehl was founded by monks of the Benedictine medal in 1130 as an outpost of Maria Laach Abbey. Since 1887, it belongs to the Franciscan Brothers of the Holy Cross. It is run as a residential and service facility for people with intellectual disabilities. Just like Cond, the district of Sehl was incorporated into the city of Cochem in 1932. It is characterised by its rural charm centre and beautiful residential areas with amazing views of the Moselle valley and Reichsburg Castle.

… is situated on a hill to the city centre’s south-west.
Brauheck’s history is inextricably linked to the armed forces of Germany. On the 23rd of June 1961, the soldiers of the Fighter Bomber Wing 33 (current name: Tactical Air Force Wing 33) under the command of former commodore Walter Krupinski moved into the newly built residential settlement of Brauheck. Its residences and troop accommodation had especially been built for the soldiers. The Bundeswehr being the settlements defining element in its beginning, it has strongly developed since then. Over time, more and more space for residential construction has been made available. An industrial estate provides sufficient space, that can only hardly be found in the Mosel valley. It is here that local artisans, regional businesses and companies acting on a national scale find properties fitting their requirements. Cochem’s citizens enjoy the comfort of the adjacent shopping centre. The residents enjoy Brauheck’s quiet location in the heart of nature as well as its variety of clubs and associations.